Concentration of Production and Monopolies

In large enterprises, growth of industry and concentration in production are the most characteristic features of capitalism, and ones that leads to monopoly.

A monopoly is when a company and its offerings dominate a sector or industry. They have total or near-total control of a market.

Monopolies increase the likelihood of higher prices for consumers and low or stagnated wages. They form via conglomerates, which are multiple branches of industry grouped under a single enterprise. They arise as the result of concentration of production.

Concentration of production has reached the point where it's possible to make an estimate of all sources of raw materials of a country, of several countries or of the whole world.

As a result, production has become socialized. Unless one is born under particularly wealthy and lucky circumstances, going to work is a collective bane because the social means of production remain the private property of few.

Early capitalism started with the concept of the free market. When most people discuss the “free market,” they mean an economy with unobstructed competition and only private transactions between buyers and sellers.

The general framework of free competition remains, but the pressure of a few monopolists on the rest of the population becomes a hundred times heavier.

Commodity production reigns and continues to be regarded as the basis of economic life, but it has in reality been undermined. The bulk of the profits go to the “geniuses” of financial manipulation. At the basis of these manipulations lies socialized production; but the immense progress of mankind which achieved this socialization goes to benefit monopolists.

Banks and Their Role

The original function of banks was to serve as middlemen in the making of payments. In doing so, they transform inactive money capital into active - into capital that yields a profit (through the stock market).

As banking developed, it became concentrated in a small number of establishments. The banks grow from middlemen into powerful monopolies, having at their command the whole of money capital.

Big enterprises, banks in particular, absorb the small ones and subordinate them by acquiring holdings in their capital by purchasing or exchanging shares. 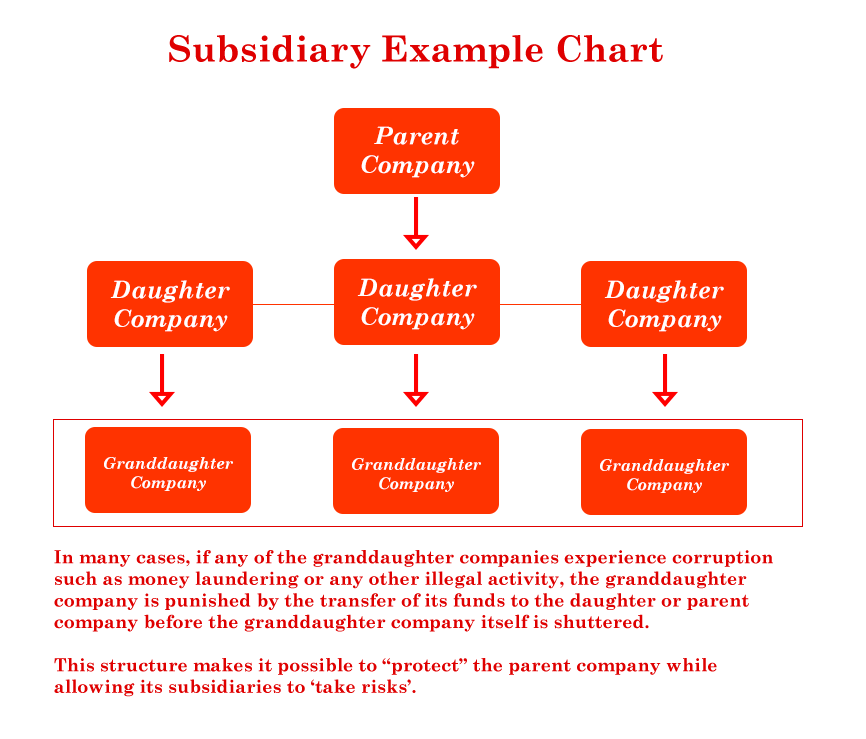 Subsidiaries greatly benefit companies by helping to compartmentalize liability risks in order to keep creditors away from other valuable assets. For example, one subsidiary business may file for bankruptcy without having the rest of the business go through the process.

The stock market has long ceased to be the indispensable medium of circulation that it formerly was, back when the banks were not yet able to place the bulk of their money into it.

It stands to reason that the big banks’ enterprises, worth billions, can accelerate technical progress with means that cannot possibly be compared with those of the past. But at what cost?

This transformation represents a fundamental process in the growth of capitalism into imperialism.

Finance Capital and the Financial Oligarchy

It's no coincidence that it's difficult to get a clear picture on the structure of any corporation. Most corporations obscure and embellish their methods, revenue sizes and connections with the government.

The holding system also serves enormously to increase the power of the monopolists. It enables them to resort to shady tricks to deceive the public, made easier because directors of the parent company are not legally responsible for its "independent" subsidiaries. This creates a medium through which they can pull off anything.

The simplest and most common procedure for making the inner-workings of an enterprise indecipherable is to divide a single business into several parts. The advantages of this system for various reasons - legal and illegal - are so evident that big companies which do not employ it are the exception.

Ruined businesses become are snapped up after every recession, only to be reorganized or have their assets stripped. By buying up infrastructure and transport, finance capital finds new avenues for investment on a huge scale in the property sector. Even the state is not immune, as – directly or indirectly – public officials are also bought up.

The Export of Capital

In early capitalism, the days of free competition, the main export was goods. Typical of the latest stage of capitalism is the export of capital. An enormous superabundance of capital has arisen in advanced countries.

If capitalism could develop agriculture (which lags behind industry everywhere), if it could raise the standards of living, it wouldn't be capitalism by nature.

As long as things stay as they are, surplus capital will be utilized not for the purpose of raising the standard of living. This would mean a decline in profits for capitalists.

In underdeveloped countries, profits are usually high because capital is scarce, the price of land is relatively low, wages are low, and raw materials are cheap. They have no need to export capital. The necessity to export capital arises from the fact that capitalism has become overripe and capital cannot find a field for "profitable" investment.

When capital is exported to undeveloped countries, it accelerates the development of capitalism in those countries. Countries with the means to export capital obtain certain 'advantages', which brings light to the peculiarity of finance capital and monopoly.

Monopolies introduce the utilization of "connections" for profitable transactions. This takes the place of the free market. The export of capital abroad becomes a means for encouraging the export of commodities. Transactions between particularly big firms assume a form which borders on corruption.

In this way, finance capital literally spreads its net over all countries of the world. Capital-exporting countries literally divide the world among themselves.

The Division of the World Among Capitalists

A handful of dominant monopolies in different nations can join together forming worldwide super-monopolies. Monopolies that first dominate their home market go on to establish international ones in other countries.

Powerful figures argue that big international businesses give hope of peace among nations under capitalism. This can hardly be true. The balance of power struck by a monopoly can be revised at any point, based on the changing balance of forces, the combined and uneven development of capitalism and in situations of crisis or war.

During financial crises especially, banks accelerate and intensify the ruin of relatively small firms by refusing a helping hand to the companies in greatest need of capital. This is hardly peace.

It is in big business' best interest to obscure the substance of the present economic struggle (the division of the world by capitalism) and to emphasize other, lesser, forms of struggle.

The Division of the World Among the Great Powers

Colonization of unoccupied territories is closely connected with late-stage capitalism. Because there are no new territories for the imperialist powers to colonize doesn't mean the existing division is permanent but rather that new territories can only be acquired by re-division of land.

Colonialism in imperialism is different than the colonialism of free trade because it is linked to financial monopolies. It has the new aim of giving monopolies a guarantee against their competitors by monopolizing control of the sources of raw material and labor in a specific territory.

Countries with the fastest pace of economic and technological development are not necessarily the ones with the most colonies. This contradiction can only be solved by war for re-division between these powers.

Imperialism, as a Special Stage of Capitalism

Imperialism emerged as the development and continuation of capitalism. Capitalism only becomes imperialism at a very high stage of development. The main feature is its displacement of free competition in favor of monopoly.

Free competition is the fundamental characteristic of capitalism and commodity production. Monopoly is the exact opposite of free competition, but we have seen the latter being transformed into monopoly before our eyes, creating large-scale industry and forcing out small industry, replacing large-scale by still larger-scale industry, and increasing concentration of production.

Some might argue that imperialism is not a stage of capitalism but rather a policy pursued by capitalists. This argument separates the political dimension of imperialism from its fundamental economic basis. The conclusion implies that this is only one type of policy in capitalism and that more peaceful ones are possible.

The Parasitism and Decay of Capitalism

Parasitism is characteristic of imperialism. Like all monopoly, it cultivates a tendency toward stagnation and decay.

Reducing the cost of production (increasing profits) by introducing technical improvements is in the direction of change. These kinds of advancements have the potential to benefit greater society, but instead they are used to increase efficiency of exploitation.

Imperialism is defined by an immense accumulation of capital in a few countries. This grows the class of rentiers, people living on income from property or investments. These people take no part in enterprise - their profession is idleness. The export of capital isolates these rentiers from production and sets the seal of parasitism on the whole country that lives by exploiting the labor of several overseas countries and colonies.

Some allow themselves to be tricked by the propaganda, and thus turn against their fellow people by arguing defend the imperialism.

The unique part about the situation we live in today is the prevalence of conditions that increase the incompatibility between opportunism (taking advantage of circumstances with little regard for the consequences are for others) and the interests of the working class.

The Critique of Imperialism

By 'critique of imperialism' we mean the attitude of different classes of society toward imperialist policy.

General enthusiasm over prospects of imperialism are signs of the times. This ideology penetrates the working class.

Bourgeoisie (capitalistic owners of the means of production) scholars and publicists obscure the complete domination and roots of capitalism and strive to distract us. They do so by means of proposing "reform" such as police supervision of trusts or banks. It should be noted that arguing these points is in their best interest.

The Place of Imperialism in History

The four manifestations of monopoly capitalism are:

Monopolies and oligarchy strive for domination instead of liberty. It does this through the exploitation of an increasing number of small or weak nations by a handful of the richest and most powerful nations.

Capitalism is growing far more rapidly than before, becoming more and more uneven in general. Its unevenness manifests itself in the decay of countries which are richest in capital.

The receipt of high profits by the capitalists makes it economically possible for them to bribe certain sections of the workers and win them to the side of the bourgeoisie of a given industry or given nation against all the others.

Any remaining 'optimism' toward imperialism is thinly-veiled opportunism. The extraordinary rapidity and the particularly revolting character of the development of opportunism is by no means a guarantee that its victory will be durable: the rapid growth of a malignant abscess on a healthy body can only cause it to burst more quickly and thus relieve the body of it.